Animals and Food in the Cafe Once we sat down, a hen came under our table and stared at us. Realizing we had no intention to feed her, she slowly hovered back to the carpark. A few months ago, the hen and her friends were still living inside a cage placed near the entrance of the cafe. In our recent visit, the cage was gone. The chickens have grown a lot, therefore, they are now allowed to wander freely around the cafe courtyard, the farm, and the carpark.

This cafe that we frequently visit is called Kosora. It is located in Moriyama, a rural area in Nagoya. This area used to be surrounded by green, however, since around ten to twenty years ago, the ward has undergone a drastic scale of development. The trees were torn down and replaced by residential buildings around the farmland, but the sacrifice of the woods failed to plant the seeds of prosperity. I often jokingly say, this is an area of massive McDonald’s restaurants and cheap conveyor-belt sushi chains, which is a typical scene in the rural areas in Japan. The forest park is luckily left unharmed. The ponds of various sizes can be found inside of the park and also next to the road; Cafe Kosora is exactly situated by a roadside pond.

We were sitting in the outdoor area, which provided the perfect spot to stare blankly at the pond while waiting for our order to arrive. We saw an egret standing across the pond in an upright posture, whereas closer to us were two ducks in a verbal fight. To enjoy the nice weather, the cats living in Cafe Kosora were sunbathing in the carpark, and the cafe owner’s three Akita dogs were taking a nap in the doghouse. In the cool autumn breeze and blissful sun, butterflies were flying and birds were singing. The dogs would sometimes get agitated and bark loudly, the bees occasionally caused a stir among the customers… During the days when we are swamped with work, we would have a stronger desire to come back to Cafe Kosora, which is tranquil at times and a bit chaotic at times.

In Cafe Kosora, we feel so close with nature and the animals. The consequence of such closeness is, ironically, a sense of guilt. Next to the carpark are Kosora’s vegetable fields, chicken coop and two pigsties that accommodate four black pigs. In autumn time, we would pick up some acorns from the ground to treat the pigs. The more we meet the pigs, the more we can tell their emotions from their chubby faces. When seeing a piece of meat in our plate, even if it is a tiny piece of meat, we are somehow reminded of the emotion of the animals. Cafe Kosora seldom offers meat dishes, but when we see meat in our food, we would surely visit the pigsties before leaving. We would count, one, two, three, and four, and got relieved that we did not eat any of them. After having a few anxious meals, we began to be careful with ordering by going for the vegetarian option to avoid having any chicken or pork.

In the Japanese film School Days with a Pig, the teacher invites his students to raise a piglet at school until it grows fat enough to go to the butcher. His idea is to teach the students to cherish food and life and be thankful for the animals’ sacrifice. Being a foodie who fails to find my peace of mind, I still feel uneasy when ordering my food. 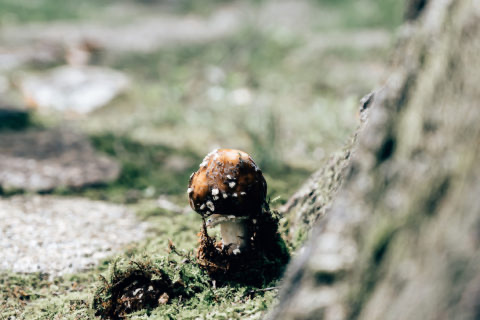 Forest, born for flowing water and from creation As tough as water